9 Blazing Diamonds is a new 25 payline slot by Microgaming which makes the total number of slots in the WowPot Jackpot Series to Eight.

Also, 9 Blazing Diamonds also includes the 4 progressive jackpots and has an RTP of 93.30% with a medium to high volatility.

According to experts, 9 Blazing Diamonds has a hit rate of 41.94% which means that you should get a win at every 3.38 spins, but it’s unconfirmed. 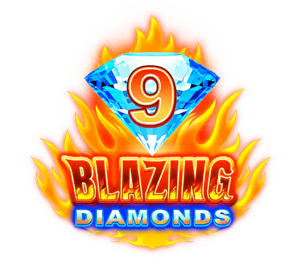 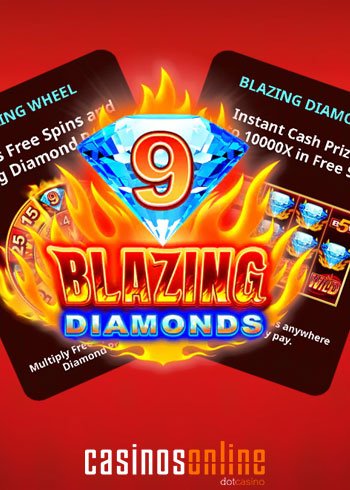 9 Blazing Diamonds come with 4 Progressives Jackpots with a bonus round twist that makes this release unique.

9 Blazing Diamonds has a classic fruit slot appearance, and players get to benefit from Scatter Jackpots up to 2500x during the base game.

The maths model is solid combined with an unusually high hit rate of 41.97%.

There are a generous amount of small wins keeping players afloat as you aim for those double, triple or quadruple jackpot prizes.

Meaning, you could win up to 10,000x your bet when you get the 4x multiplier, notwithstanding the WowPot Jackpot starting at a fiery $2 million…. Now that’s blazing hot!

9 Blazing Diamonds also available for Smartphones, and betting starts at $0.20 up to $25.00 per game spin.

Even today’s online casinos still love the old classic cherries, bells, dollar signs and two different BAR symbols which have made this slot game rather icon.

Furthermore, there are three types of flaming 7’s: single, double, and triple variations.

There is also the eponymous blazing Diamond which is blue and engulfed in flames, and it’s the games scatter.

The flaming red wild symbol is the highest value symbol, and land 5 on a payline to receive 40x your stake.

There is also a bonus symbol, the Flaming Wheel, and it triggers WowPots Blazing Wheel feature.

Don’t be fooled by the games simplistic look because you will soon discover it provides an exciting gaming experience thanks to the bonus features and WowPot Jackpot.

This feature pays out instant cash prizes, and the value depends on the number of diamond symbols landed. Below is what you stand to win:

Importantly, the above prizes can increase if landed during the Free Spins feature.

When you land 3 Flaming Wheel symbols on reels 1, 3 and 5, you trigger the Blazing Wheel feature.

The Bonus Wheel then becomes active and spins to reveal your prize.

The Free Spins feature gets activated via the Blazing Wheel feature.

If the pointer lands on the Free Spins, the Wheel spins again to reveal the multiplier.

At this point, you can win up to 30 Free Spins with a 2x, 3x or 4x multipliers that remain active during the entire game round or one of the four progressive jackpots.

The Blazing Diamonds feature can also get triggered during the Free Spins feature boosting the prizes according to the value of the multiplier.

As a result, landing 9 Blazing Diamond game symbols across the 5 reels with a 4x multiplier and win the huge 10,000x your bet stake.

The Jackpots are one of the many upgrades received, and it’s the addition of their 4 Progressive tiered jackpots with the WowPot Jackpot seeding at $2 million. The other three Jackpots are:

All four progressive jackpots are linked to each of the WowPot slots in the series. Remember the WowPot Jackpot starts at at a huge $2 Million.

Moreover, the 2500x base game potential is another plus; however, the bonus multiplier hots things up because players stand a chance of winning 10,000x the stake before chasing the big jackpot.