Your challenge is to play and win one of the 4 linked WowPot jackpots that are on offer in Microgaming’s revamped slots series. 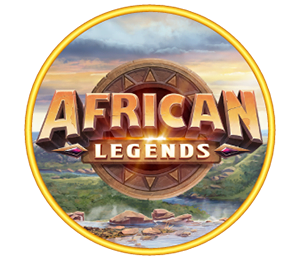 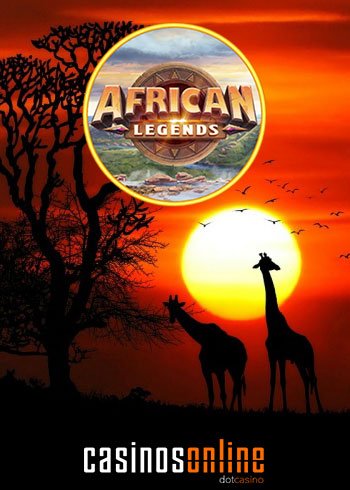 Take a spin into the Wilderness and experience the magic of WowPots African Legends jackpot slot.

African Legends has a stone rock wild animal imagery in this 5 reel slot with a huge 243 paylines.

Developed exclusively for Microgaming by Slingshot Studios, African Legends is packed with some fantastic features.

African Legends is also linked to the WowPot Jackpot pool which offers 4 Jackpots.

The African Legends WowPot RTP is 94.92% and has a hit rate of just over 37%, so players can expect to land winning combinations around a third of the time.

African Legends only has 9 standard symbols on the reels plus one Wild symbol.

No Scatter is required for this game as all the main Bonus features spring from the Rolling Reels element or the randomly triggered Wild Blast feature.

The low-value symbols, on the other hand, are card suits with a tribal feel to them.

The gold totem mask is the wild, and it pays 10x your stake for landing five on adjoining reels.

The rolling reels activates when you land a winning combination in both the base and Free Spins.

Winning symbols get removed from the grid, and new symbols drop down to replace them.

Firstly, the Wild Blast is a randomly triggered bonus feature in the base game of African Legends that can also be triggered frequently.

Secondly, when you hit the spin button, the bonus will trigger and as the reels spin, up to five Wilds get added to random positions on the reels.

Finally, we have found that winning any money in the Wild Blast feature is not about how many Wilds you get, but rather where they land on the reels.

The setting for the Free Spins is a magnificent African thunderstorm accompanied by percussion drums creating the right amount of energy and excitement of what is to come.

Also, unlike many other slot games that use the scatter to trigger the Free Spins, WowPots African Legends WowPot uses the Rolling Reels feature as its main trigger for the Free Spins.

The Rolling Reels wins can trigger successive wins from the same spin, should you land four or more of these wins in succession you will trigger the Free Spins Bonus Round.

As a result, you receive 12 or more Free Spins with a Multiplier.

Importantly, there are up to 20 Free Spins up for grabs with a 10x Multiplier.

Below is a guide to African Legends multiplier trail:

According to developers, the higher the bet, the more frequent are your chances of playing the Jackpot wheel.

Secondly, you need 8 successive Rolling Reel wins to trigger the Major Jackpot which is the second of the highest Jackpots.

African Legends designed by Slingshot Studios for Microgaming is another brilliant addition to their renowned WowPot Jackpot slots series.

Also look at WowPots Sisters of Oz for some interesting game features and a bigger betting range.

Finally, African Legends is a mobile friendly jackpot slots that can be played on any of the latest smartphone online casinos from as little as $0.25 per game spin.