God of Storms – Age of the Gods

In Age of the Gods, God of Storms the Gods come bearing gifts in this five reels 25 paylines slot game by Playtech.

It’s a medium volatility slot and besides the four randomly triggered Progressive Jackpots Gods of Storm also have amazing features such as Expanding Wilds with Re-Spins, Multipliers and Free Spins. 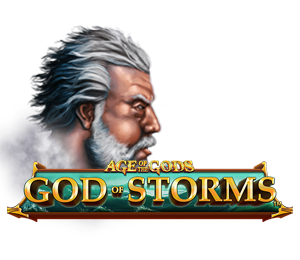 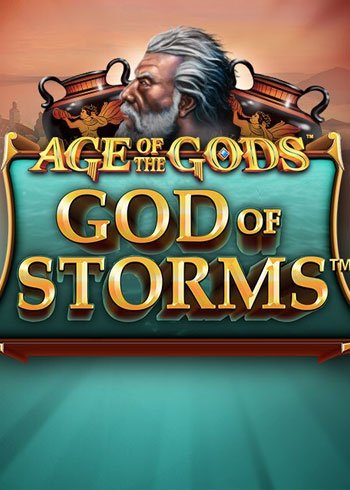 God of Storms – Age of the Gods Slot Review

Venture deep into the land of the Gods in this five reels 25 payline Progressive Jackpot slot from Playtech.

God of Storms is the eighth addition to Age of the Gods slots series and players will be in awe of its visual and cinematic soundtrack.

The story line in this slot revolves around Aeolus the King of Winds.

He was appointed by Zeus to guard the storm winds, and he appears on the reel grid to award Multipliers.

Go into Battle with Aeolus and enjoy the Stacked Wilds, Re-Spins and four Mystery Progressive Jackpots in God of Storms.

Betting in Age of The Gods, God of Storms starts at $0.01 per spin on this flexible paylines slot, reaching $250 per spin.

The high-value symbols populating the reels of this magnificent Progressive slot are the Spartan, Artemis, Hydra and a Greek Vase. The card icons represent low-value symbols.

Age of the Gods: God of Storms does not have a Scatter symbol but instead has two Wilds.

Age of the Gods God of Storms Wild Symbols

In this slot game, there are two Wilds, and they appear Stacked, the Ship Argos is the Special Wild symbol.

The regular Wild is the word Wild written on a marble stone.

In Age of the Gods, God of Storms players benefit from two unique features, and both features involve the Wilds which appear on the three middle reels.

When the ship wild fill the reel the wild wind Re-Spins Feature is triggered.

This involves the God of the Storms on the right-hand side of the reels. He effortlessly sends the Stacked Wild Ship across the game board one reel at a time.

While this happens, players also have their winnings multiplied by 1x up to 5x each time the God blows the Ship.

God of Storms Free Spins will be re-triggered jointly with the Expanding Wilds, they allow players the chance of spinning the reels many times for Free.

There are a total of four Progressive Jackpots that players can benefit from in God of Storms.

All Age of the God slots are connected to the same Jackpot network that can win you some big money.

In conclusion, God of Storms slot is brilliant as it’s a lesson in Ancient war and brings to light many of the ancient mythical deities.

The slot is not only visually satisfying but also has some superb winning combinations with its 25 flexible paylines.

The most significant assets are the Multipliers, Free Spins that can be re-triggered and the four Progressive Jackpots.