Big Circus is the latest Fire Blaze Jackpot Slot from Playtech and designed by Rare Stone Gaming with an RTP of 96.37%.

The theme is based on the thrills and excitement of going to the Circus! 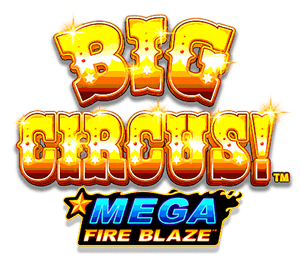 Following the slots Legacy of the Tiger and Khonsu God of Moon, this beefed-up Big Circus Mega Fire Blaze offers Re-spins and a range of Jackpots.

Big Circus was designed for Playtech by Rarestone Gaming studios.

The theme is a day at the circus with the reels set under the big top with bright lights, cannons, and intriguing performers.

The RTP is above average at 96.37%. However, Big Circus has ranging payback values where players can get a lower return rate of 95.42% depending on where they play.

It’s advisable to check the pay tables before depositing.

The game is set up to be a more medium volatility slot allowing for a good balance of wins throughout the base game.

Big Circus features circus-themed graphics and symbols with an entertaining show playing in the background.

Jackpot slot, Big Circus has various symbols ranging from the basic Royals, to the circus performers, which includes acrobats, cannons, clowns, monkeys, and the ringmaster.

The Ring Master lady is the Wild symbol, which can substitute any regular symbols providing a new winning combination.

The Wilds land only on the last four reels, which means they cannot form combinations by themselves.

Circus Tent appears as the scatter symbol. Therefore when you land 3, 4, or 5 scatters to be awarded at 1x, 10x, or 50x the bet stake.

Importantly, this will activate the games free bonus spins.

Also, the Trapeze Woman takes the prize of a maximum of 10 other symbols and adds them to its own. It also turns into a Target.

Clowns will add up to 5 extra Targets on the reels, also becoming a Target.

Also, whilst playing through these re-spins, all positions can be filled with Targets or get to unlock all four extra rows by removing padlocks.

Should this happen, the curtains from the top will pull back, offering a chance to win the Fire Blaze Grand Jackpot!

The Mega Circus Fire Blaze Re-spins feature can re trigger with six or more Target and Cannon symbols landing anywhere on the reels.

3 Re-spins will be awarded, to begin with, while all are triggering Cannon and Target symbols get locked in place for the remainder of the bonus.

The Re-spins Bonus game aims to collect as many locked Target symbols as possible to get the reward equal to the sum of all Multiplier values in view.

Once the Mega Fire Blaze Re-spins begins, players will be taken to a new Reel Set with five additional symbol rows added to the top.

The only active symbols will be Targets, Cannons, Strongman, Trapeze Woman, and the Clown – these premium symbols will switch their roles and play into the features, as explained below:

In addition, each of the extra rows contains two Padlocks, the Cannon symbols mentioned above are crucial to unlocking new symbol spaces.

Any Cannon symbols that trigger and land during the feature will remove one padlock from the lowest symbol row transforming into a held Target symbol.

When both Padlocks are removed, the row will become unlocked.

Land 3, 4 or 5 Scatter symbols on the reels in the base game to be awarded five free spins.

During the bonus, whenever a Wild symbol contributes to a win, it doubles the win value. Retriggers are possible when landing 3 – 5 Scatters plus five extra spins.

Win one of the four fixed Jackpots during the Mega Fire Blaze Re-Spins. Watch out for Star symbols that can land on any position.

Once the feature ends, all held Star symbols will transform into a Mini, Minor, or Major Jackpot.

Finally, if all symbol positions are locked, or four extra rows become unlocked, the reels will spin with opened curtains.

Each Re-spin with the curtains opened can randomly award the Grand Jackpot prize worth over 2000x the bet.

Firstly, Fire Blaze’s new Big Circus can be played for real money on a smartphone or desktop computer.

Big Circus’s betting starts at 10 cents per spin right up to $500 a spin for the high rollers.

Additionally, each title in the Fire Blaze slot series is unique with different functions.

Another very popular jackpot series from Playtech includes Age of the Gods slots which should be part of your gaming strategy.