Blue Wizard is a Fire Blaze Jackpot slot by Playtech based on spells, Wizardry and magic and another addition to the Fire Blaze series. Blue Wizard is a five-reel, 30 payline low to medium volatility slot offering four Progressive Jackpots and an RTP of 96.51% 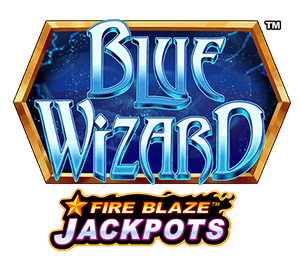 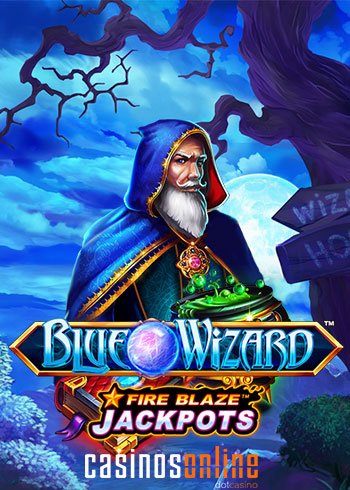 Blue Wizard Slot from Playtech is another of their slot games offering Fire Blaze Jackpots, It is a five reels and 30 pay lines slot with a magical theme and has that magnificent Fire Blaze Re-spin feature where players can win life 1 of 4 life-changing and magical fixed jackpots of 2000x your bet.

Players who enjoy magic and Wizards are going to love this game, and it is a very volatile game so beware and pay attention because the last thing you want is the Wizard getting away with your bankroll

In this Fire Blaze Slot Blue Wizard, there are a group of high-value symbols and consist of four on theme picture symbols. They are the owl, golden ring, a cauldron and a spellbook creating that mystical Harry Potter feels of Wizardry. The low-value symbols are your regular royal symbols. There is also a Moon symbol which acts as the Multiplier.

The Castle is the Scatter Symbol and triggers the Free Spins feature. Players also receive up to 50x their total bet if they land between 3-5 Scatters on the reels.

In Blue Wizard Slot game the Wizard acts as the Wild and can stand for any symbol bar the Scatter and Crystal Ball symbol.

The Crystal Ball acts as the Bonus Symbol, and the values that appear on the Crystal Ball are multiplied by your total bet in this Fire Blaze Slot Blue Wizard. These symbols appear on reels 2, 3, 4 and 5 only.

Blue Wizard has a Free Games Feature which is triggered when you land three or more of the Castle Scatters anywhere on a base game spin in this Fire Blaze Slot. Landing 3, 4 or 5 will give you 1, 10 or 50x your stake. With six Free Spins awarded all Blue Wizard Wild symbols appearing on the middle reel have a Multiplier of 2x, 4x, 8x or 16x.

There’s are more magical moments in this Fire Blaze slot, Blue Wizard. Get a win with a Wild and the Multiplier is added to your winnings. The Free Games Feature can also be re-triggered to win six more Free Spins and access the Fire Blaze Re-Spin Feature.

A Spell Book of Jackpots:

This Fire Blaze slot game comes with four Progressive Jackpots, a fixed Grand Jackpot of 2000x your bet. To win the Grand Jackpot players need to fill a reel position with 6 Moon symbols during the Fire Blaze Re-Spins feature. The smaller fixed jackpots are the Mini, Minor and Major Jackpots.

Playtech’s Blue Wizard is a Fire Blaze Slot and has four Progressive Jackpots as well as other sweet feature combinations. The visuals are magnificent, transporting you to another realm while enjoying the Free Spins, which comes with a 16x multiplier and a 2000x Grand Jackpot which is appealing. The biggest wins come in the Free Spins round due to the potential 16x Wild Multiplier resulting in wins of 2880x your stake on every spin. That’s Magic!