Watch the Captain’s golden compass for mysterious and rewarding treasures. Smartphone users can play Captain’s Treasure on all the latest mobile devices.

Find out more about the volatility of Captain’s Treasure or the Return to Player, otherwise known as the slots RTP. 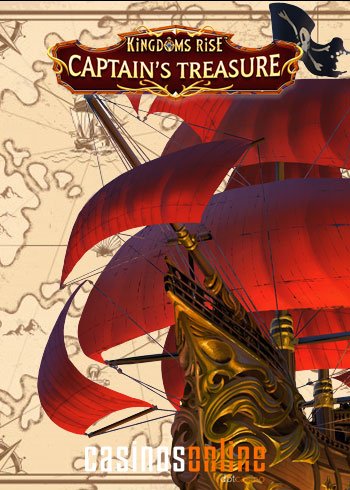 Kingdoms Rise: Captain’s Treasure is another new addition to the Kingdoms Rise jackpot network from Playtech.

This pirate-themed 6 reels 50 paylines slot takes place in the air as a red and blustery sky dominates the backdrop, and it’s one, unlike any other pirate-themed slot.

Captains Treasure’s 50 paylines are fixed at all times.

The higher value symbols in Kingdoms Rise-Captain’s Treasure are as follows:

The Wild symbol is the W and triggers the Re-Spins feature and leaves regular Wilds in its wake. The gold doubloon is the slots regular wild

The Re-Spins bonus feature is triggered when the Golden Compass Wild Symbol lands on the reels.

It activates the Captains Treasure Re-Spins Feature and pays 20x the stake for 6 across a payline.

Whilst playing the Captains Treasure Re-Spins, the Wild will move around the reels, leaving a trail of extra Wilds behind.

This feature ends when the Wild reverts to its original position.

About the Feature Shop In Kingdoms Rise

As you spin the reels, you can win up to 15 game tokens per spin.

Use your game tokens to buy feature games from the Kingdoms Rise Feature Shop.

Below are some examples of the high stakes features available to buy using your game tokens in the Feature Shop:

In the Kingdoms Rise, Captains Treasure players stand a chance of winning any one of the three Progressive Jackpots, namely:

Captains Treasure is an unusual pirates slot with stunning graphics and a rewarding feature.

It’s all about the golden compass wilds, which give you re-spins with roaming wilds.

Captains Treasure does not have the most significant wins when comparing it to the other slots within the Kingdoms Rise Jackpot Series.

However, in our opinion Captain’s Treasure was designed more for the casual player with its max win of 1000x the stake, excluding the 3 progressive jackpots.

Try Forbidden Forest in the Kingdoms Rise series, filling your screen with the warrior produces wins up to 11,520x per bet spin.