Released in August 2020, Kingdoms Rise, Chasm of Fear is a striking Progressive slot by Playtech with paylines increasing from 1024 up to 3456 ways to win.

Chasm of Fear is a high volatility slot and offers players an RTP of 97.06% and a maximum win of 10,000x your bet stake. 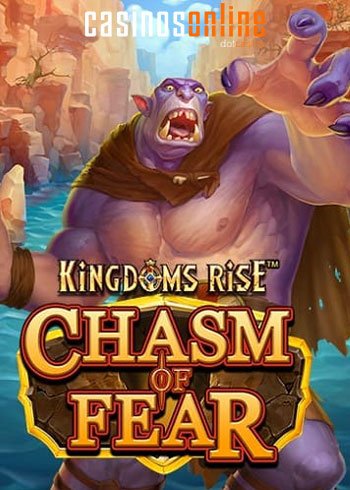 Playtech’s Kingdoms Rise, Chasm of Fear comes with new heroes, reels of fun and stunning graphics. It’s five reels, four rows and 1024 ways to win slot with an RTP of 97.06% in this high volatility slot offering a max win of 10,000x stake per spin.

In the Re-spin Feature, paylines increasing up to 3456 ways to win. Moreover, it offers players the chance of winning one of three Progressive Jackpots.

It’s a pirate-themed slot with boulder throwing giants and an epic soundtrack with bright visuals in high definition.

Kingdoms Rise Chasm of Fear is playable on all the latest smartphones and mobile devices. Betting ranges from $0.10 up to $500 per spin in this high volatility slot with a decent RTP of 97.06%

The low paying symbols in Chasm of Fear are the precious and colorful gemstones. In contrast, the high paying symbols are the three Pirates, Serpent, Mermaids and Monkeys.

Your Wild symbol in Kingdoms Rise Chasm of Fear is the Treasure Chest and assists in producing winning combinations.

The giant symbol is the Scatter, and he only appears on reel 5. When he does, he triggers the Respin feature. Game reels then expand to have 4, 6, 6, 6 and 4 rows giving you 3465 ways to win, and you receive a free re-spins for more ways to win.

Free Spins are triggered in a similar way to the Re-Spin Feature. Here the Scatter needs to land on row 3, 4 of reel 5. During this feature, the reels also expand, giving players 3465 ways to win.

Players also initially receive 6 Free Spins and an additional 3 Free Spins should the Scatter land on the third row of reel 5.

If the Scatter lands on the fourth row of reel 5, you receive 6 more Free Spins. There is no limit on the amount of free spins.

Chasm of Fear slot is linked to the Kingdoms Rise progressive jackpot network. The Jackpots get triggered randomly, and players stand a chance of winning any one of the following 3 Jackpots:

Kingdoms Rise, Chasm of Fear is a slot with bonus features that consist of Free Spins and Re-Spins, making it a simple slot with loads of fun.

The more ways to win during the features, the key to winning big are the 2x and 3x Multipliers during the Free Spins where you stand a chance of winning up to 10,000x your stake.

Add in the Kingdoms Rise jackpots, and it’s a slot game every serious casino player should play.