Meet the Stars of this show Achilles, Helen of Troy and Paris in Age of the Gods, Epic Troy slot by Playtech.

This slot game is as epic as its name suggests, boasting five reels and 243 ways to win.

Epic Troy also has an array of rewarding features such as Respins, Free Spins, Multipliers and Stacked Wilds. 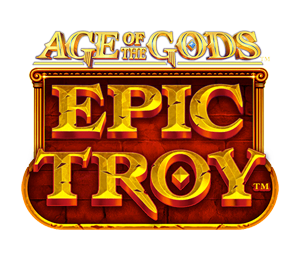 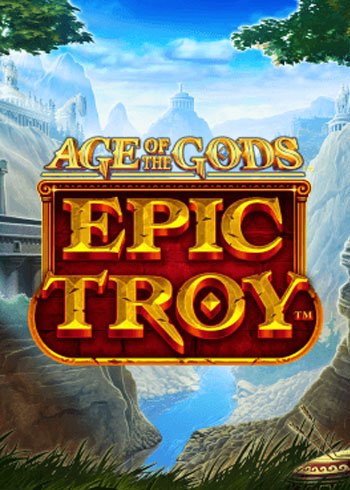 Age of the Gods, Epic Troy is a beautifully crafted online casino game and features Helen of Troy who was said to be the most beautiful woman in the world.

Her face is said to have launched a 1000 ships into battle so here’s hoping she can assist players in their battle to cash in on some nice prizes.

In this Age of Gods Trojan war themed slot game, Troy is brought to life and features on either side of the five reels with sun-basking down on the glorious Temples and Statues.

The lower value symbols in Age of the Gods Epic Troy slot game are four letters of the Greek alphabet, which are Alpha, Beta, Omega and Zeta.

The four high paying symbols are Achilles, Paris, Helen of Troy and a Ship.

Helen of Troy is the most rewarding symbol, land 3, 4 or 5 in combination, and she will reward you with 0.5, 1 or 2.5x your stake, respectively.

The three character symbols mentioned above can also land fully stacked up to 3 high on the reels in Age of the Gods Epic Troy.

Age of the Gods Epic Troy’s Wild Symbol appears on reels 2, 3 and 4 and substitutes for all symbols except the Scatter Symbol.

The Scatter symbol in Epic Troy is a Shield that features a horse’s head, it is key to the free spins bonus feature game.

Helen of Troy’s Re-Spin feature requires players to land 2 or more full stacks of Helen symbols to trigger the feature.

You win three Re-Spins and, during the Re-Spins, only the Helen symbols are active.

The Re-Spin feature ends when you are no longer able to fill the reels with Helen symbols.

Should you manage to do the latter, you win as much as 607x your bet.

The Paris Re-Spin Bonus Feature is triggered when you land two or more Paris Stacks on the reels.

You then receive 2 Re-Spins with only the Paris symbols being active.

This features main aim is to form a block of 3 or more adjacent Paris symbol stacks.

When this happens, you benefit from the Mega Reel, rewarding you with additional cash prizes which are as follows:

To trigger the Achilles Re-Spin Bonus Feature game, you will need to land two or more full Achilles symbols on the reels.

In this feature, you only receive one Re-Spin where the Achilles symbols are held in position.

The free games feature in Epic Troy is activated by landing three or more Scatter symbols (the Shield) anywhere on the reels.

During the Free Spins feature, the only symbols visible are Helen of Troy, Paris, Achilles, and the Wilds and Scatters symbols.

There will be no low-value Greek Alphabet symbols which mean bigger and better wins.

The Free Spins feature can be re-triggered, giving you a further 12 Free Spins.

The Age of the Gods series allows you a chance to win one of the four Progressive Jackpots.

All you need to do to be in line to win is to keep those reels spinning at the maximum bets.

Age of the Gods Jackpots can happen at any time regardless of what lands on the reels.

Furthermore, in the Jackpot game there are 20 gold coins in a grid.

Each of the coins represent a Jackpot, pick 3 matching coins to win the corresponding Jackpot.

In conclusion, Epic Troy is another worthy addition to the Age of the Gods Jackpot series. It has three Re-Spin bonuses, four Progressive Jackpots as well as a free spins bonus feature.

Finally, another successful Jackpot Series by Playtech is Kingdoms Rise with over 9 exciting worlds and the “buy a feature shop”.