Furious 4 – Age of the Gods

Furious 4 is a Playtech slot game that comes with four unique bonus features and a chance to win one of the four Age of the Gods progressive jackpots.

Furious 4 has five reels with 20 paylines that is compatible with all smartphones.

Play Furious 4 slot for free in demo mode or for real money after registration. 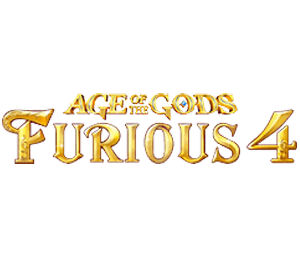 Furious 4 Age of the Gods Review

Get ready to encounter the Furious 4 mighty deities from Greek Mythology in Playtech’s Age of the Gods slots series.

Meet the Gods Prometheus, Apollo, Atlas and Pandora as you spin the reels of this 20 payline five-reel slots.

Age of the Gods, Furious 4 is a Progressive Jackpot slot which is playable on desktop or smartphone from as little as $0.20 to $500 a spin.

Meet some of the lesser-known Gods in Furious 4.

Also, four Gods feature in this slot, they are Atlas, Apollo, Pandora and Prometheus all in the form of a variety of impressive slot game symbols.

These are your premium symbols yielding 37.5x to 100x your stake.

The low paying symbols are the royals 9 through to A, awarding between 5x -12.5x your bet for five of a kind

The games Scatter Symbol in Furious 4 is the Throne, get three or more to multiply your payout and receive 12 Free Spins.

The Wild symbol in Furious 4 is the Circular 4, it can replace any symbol except the Scatter.

A bonus payout happens when you land two or more on a payline.

The Wild rewards you with 10,000x your line bet for five on a payline.

The main feature in Age of the Gods Furious 4 is the free spins bonus game.

This feature is triggered when you land three or more Scatters anywhere on the reels.

You receive 12 Free Spins with the Furious 4 Feature available, and they are as follows:

When the God Apollo covers the middle reel during this feature, the Age of Light Free Spins Feature is triggered, and you receive 4 Free Spins.

Apollo substitutes for all the other symbols excluding the Wild and Scatter Symbols, and he expands to cover the entire reel.

In the Age of Curiosity feature, you receive a 1x stake cash reward when the God Pandora covers the middle reel during the Free Spins Feature.

Added to this you receive four Age of Curiosity Free Spins with a 1x Multiplier.

Each time Pandora appears, she increases the Multiplier by 1x.

Receive four Age of Fire Free Spins when the God Prometheus covers the middle reel during the free games feature.

The Atlas feature will activate when the God Atlas covers the third reel, he then rewards you with 3 Age of Endurance Free Spins.

Atlas then freezes on the reels for all remaining Age of Endurance Bonus Spins.

The Jackpot game are randomly triggered, and the higher your bet, the better your chance are of entering the Jackpot Game.

When you play the Jackpot Game, you are guaranteed to win one of the 4 Progressive Jackpots.

The bonus games are intense and filled with suspense, especially as you are up against four powerful Gods in Greek Mythology.

The fact that there are four Progressive Jackpots also adds to this slots appeal.

Age of the Gods slot, Furious 4 is a godly realm filled with Multipliers, sticky premiums and can lead to wins of up to a 1000x your bet on a single spin!

Also if you enjoyed playing Furious 4, then try playing Age of the Gods slot, Glorious Griffin which is another exciting game.

Finally, Playtech has another series of slots namely, Fire Blaze Jackpot slots which offer just as much excitement as Age of the Gods.