Goddess of Wisdom – Age of the Gods

There are 4 Progressive Jackpots and 3 Free Spin options with Expanding Wild Symbols in this medium-high volatility slot with an RTP of 94.94%. 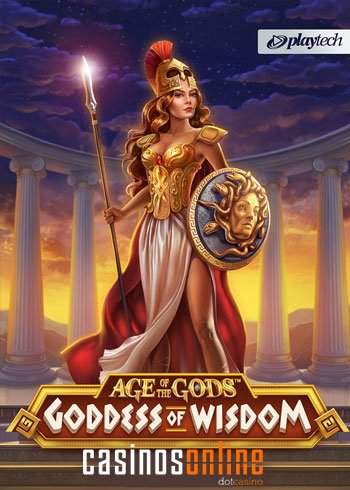 Players enter the world of Ancient Greece in this Age of the Gods slot, Goddess of Wisdom. In this five reels 20 payline slot game, Greek Goddess Athena holds power.

Furthermore, you might need to summon Athena to assist you in triggering a round of Bonus Free Spins with Multipliers.

This Age of the Gods slot is unique as it only focuses on one deity and that’s Athena who was considered one of the most powerful Goddesses in Ancient Greek times.

Athena acted as the Goddess of wisdom and war as well as law, math and courage.

She was also known for her placid temperament and only used her powers when it came to fighting for justice.

Could Athena step in as you spin the reels and randomly trigger one of the Progressive Jackpots or trigger a round of Bonus Free Spins?

Also, the higher your bet amount the more chance of triggering one of the random Progressive Jackpot game.

Goddess of Wisdom is a medium to high volatility slot with an RTP of 94.94%

Players are treated to a magnificent display of artifacts associated with the benevolent Goddess.

The symbols include Armour, a Shield and a Gorgoneion which is a magic pendant and the highest paying symbol as it gives up to 5000x your line stake for five on a payline.

Other high paying symbols include a stunning Helmet and pairs of Silver Sandals. There is also an Olive Branch a symbol of peace.

Age of the Gods: Goddess of Wisdom Wild Symbol

The Wild in this slot game is Athena herself. She appears in the middle three reels only and substitutes for all the other symbols except the Scatter.

The Owl game symbol in Goddess of Wisdom happens to be the Scatter Symbol.

If players land three or more of the winged messenger, the Battle Game Bonus Feature is triggered.

To trigger the Free Spins, Battle Game players need to land three Owl Scatter symbols anywhere on the reels. You will then have three choices, and they are:

In all three of the Free Spin Features, the Wild symbols expand to fill the whole reel. Free Spins cannot be re-triggered in any of the above modes.

As with all the Age of the Gods games in the series, Goddess of Wisdom also includes 4 Progressive Jackpots randomly triggered from any spin.

As a result, when you enter the Jackpot game you will come across 20 gold coins, select coins until you match up 3 of the same and you can win one of the following Jackpots:

Athena also boosts game play during the free spins bonus round as she expands offering extra chances to complete multiple paylines at once.

Also, Age of the Gods fanatics should try one of the new slots in the series, particularly Wheels of Olympus with four bonus feature games and an RTP of 96.13%