Hall of Gods is a Progressive five reel, 20 payline Jackpot slot by NetEnt. Its available to play on smartphones and mobile devices

from as little as $0.20 and offers players the opportunity of winning one of three jackpots.

Hall of Gods has three bonus features which includes a free spins feature with tripling multipliers and wins up to 4314x your bet. 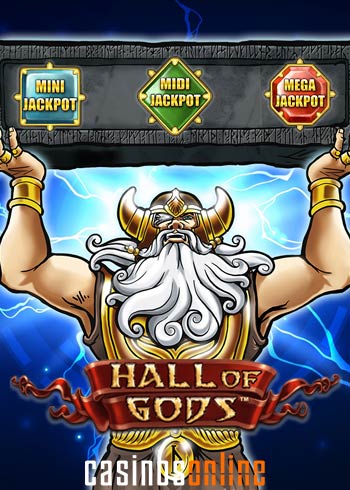 Hall of Gods is a five-reel 20 payline Progressive slot by NetEnt. It has a Norse Mythology theme and players can join the Norse Gods on the reels as they spin away to some godly wins.

Set in the skies with beautiful clouds in the backdrop one is enveloped by a certain mystical charm boosted by the sound of a live casino slot machine which adds to the thrill and excitement.

In Hall of Gods, most of your wins happen in the base game with bigger wins occurring in the Free Spins feature as well as The Pick Win Feature. The maximum gain is 4314 x your stake from each spin, and it comes with a 3x Multiplier.

Players can spin away from $0.20-$100 per spin. Hall of Gods is a low to medium variance Jackpot slot with an RTP of 95.30%. A certain percentage of your play feeds the Mini, Midi and Mega Jackpot.

The Wild in Hall of Gods Progressive Slot is the Midgard Serpent. It substitutes for all symbols except the Scatter and Bonus symbols.

The Scatter symbol is Odin’s Raven, and when players land three or more it triggers the Free Spins Feature

The Hall of Gods Progressive Slot has three Bonus Features. That is the Expanding Midgard Serpent Wild Symbol, the Free Spins Feature and the Pick Win Feature.

This feature is triggered when you land the Wild on reels 2, 3 and 4 (the three middle reels). The Wild then expands to reward you with a fully wild reel. If the Midgard Symbol (Wild) appears simultaneously on all three reels, you will get three fully Wild Reels.

To trigger the Free Spins, Feature players need to land three or more of the Odin Raven Symbols.

The more Scatters landed the more Free Spins you receive, as an example:

All the Free Spins come with a 3x Multiplier and if you get three or more Scatter Symbols during the Free Spins round, the free spins are retriggered.

The Expanding Wild Feature applies during this feature as well allowing you to play with three Wild Reels on every Free Spin.

The Pick Win Feature is what players strive for as it’s the most rewarding and appealing of all the features.

It is triggered by landing three of Thor’s Hammer symbols anywhere across the reels on Hall of Gods.

The Pick Win Feature is where you can win any one of the three Jackpots.

Use Thor’s Hammer to break the shields and match three amounts and voila you’re a winner.

The Jackpots in Hall of Gods are the:

Released way back in 2010 it, however, remains one of NetEnt’s most popular Progressive Jackpot Slots.

Visually it’s may not be the most glamorous of slot games however it offers players superb win potential.

Furthermore, players collect game tokens which are won during normal play. You can travel to different Kingdoms to play a number of exciting games, each offering 3 great jackpot games.

Play Hall of Gods At These Excellent Casinos