Joker Mega Moolah is the second slot in the famous Microgaming Jackpot series from Aurum Signature Studios and Microgaming. 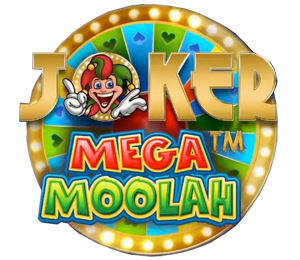 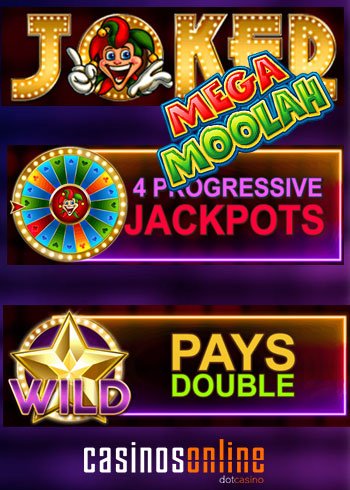 Joker Mega Moolah is a fruit-themed slot with 25 paylines, 5 reels and three rows. Joker Mega Moolah has a RTP is 93.42%, with a maximum win of 1800x your stake outside of the progressive jackpots.

As Joker Mega Moolah is the 9th addition the the series, it too offers the 4 linked Progressive Jackpots.

Special game features include a bonus game, Free Spins with Multipliers and a Jackpot wheel.

Players wanting to play Joker Mega Moolah can place bets between $0.25 to $6.25% and has a medium volatility.

As stated previously, this is a fruit themed slot with some traditional game symbols which include:

In Joker Mega Moolah, the Gold Star Wild doubles all winnings. Additionally, it also steps in for all regular symbols to form winning combinations.

To trigger the Bonus Round, players need to land 3-5 Jokers anywhere, with every Free Spin getting boosted by a 3x Multiplier.

Importantly, the Mega Moolah Jackpot wheel is triggered randomly on any spin in the base game only.

Additionally, according too Microgaming the higher your bet the greater your chances are of winning the Progressive Jackpot.

When the Jackpot Wheel feature gets triggered, it guarantees that you will win 1 of the 4 Progressive Jackpots.

The Mega Moolah Jackpots seed at the following amounts:

Joker Mega Moolah appears to have a higher RTP than other themed slots in the series which is ultimately good for real money punters.

Additionally, Joker Mega Moolah has more to offer in terms of feature games and bonuses when comparing with other Mega Moolah slots.

The wild gold star certainly helps with double wins and a bonus game with a 3x Multiplier, can produce some nice wins.