Juicy Joker is a medium volatility slot with a RTP of 92.03% developed for Microgaming by Just For The Win Studios. Mega Moolah series see Juicy Joker as the latest addition in the Progressive Jackpot Slots Series. 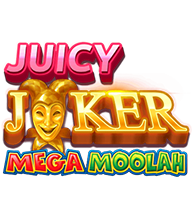 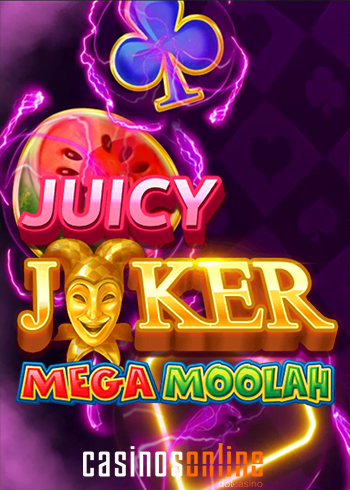 Juicy Joker Mega Moolah is under license by Microgaming and developed by Just For The Win Studios.

This is a new and exciting addition to the already famous Mega Moolah Progressive Jackpot Slots Series.

Players get to place real money bets as little as $0.10 per game spin up to the maximum of $10 per spin.

Juicy Joker is a medium volatility slot game with a 92.03% RTP ( Return To Player ).

Also a payout of 500x is triggered during the base game. However, it’s winning one of the four Progressive Jackpots is the ultimate objective of the game.

The watermelon is the game’s most rewarding symbol and pays 12.5x your total stake.

Three different Wilds can appear in the additional features and each pay 25x your total stake when 3, 4 or 5 wilds lands in a winning combination.

The Free Spins bonus round gets triggered when three Scatters land across reels 1, 3 and reel 5, players will win 9 Free Spins.

If a Juicy Wild land during the Free Spins games, that position is lined in gold, designating a returning Wild.

All positions become Wild on the 10th spin.

Land a Re-Spin Wild on the middle reel, and you will trigger the Re-Spin feature.

Re-Spins continue as long as Returning Wilds get added to their original positions.

The Progressive Jackpots get activated when three or more Joker icons land on the middle three reels.

When this happens, players get given a single spin on the Mega Moolah Jackpot Wheel. As a result, the player will win one of the 4 Progressive Jackpots:

This unique Wheel has smaller prizes which include bet Multipliers ranging from 1x to 3x.

Juicy Joker Mega Moolah slot is a winner with imagery and a jazzy soundtrack adding the finishing touches to perfection. The potentially massive jackpots are the cherry on the cake with the Mega Jackpot starting at $1 million.

One negative point is the max win of a mere 500x stake per spin in the base game.