Look out for symbols surrounded by golden fire as they expand symbols by 1 position resulting in a better winning combinations. 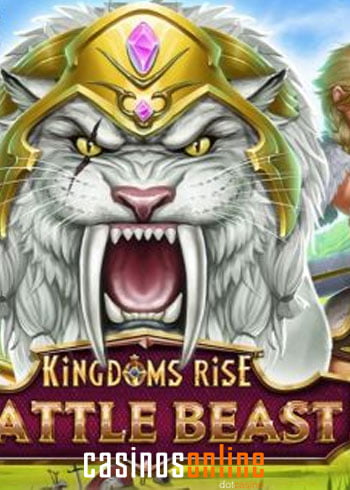 To land winning combos, players need to land 3 or more matching symbols or wilds on adjacent reels. Keep your eyes peeled for the Golden fire symbols.

These cause the symbols to expand by one position and often leads to bigger and better winning combinations.

Also, the Kingdoms Rise series including Battle Beast and all 3 linked progressive jackpots can be played on smartphones, desktop computers and tablets.

As a result, the other 3.99% gets reserved for the Kingdoms Rise Feature shop tokens and the Progressive Jackpots.

Finally, Excluding jackpots you can win up to 10,000x your bet per spin.

There is a comic book quality to the design of Kingdoms Rise: Battle Beast. The 6 lower value symbols are the gemstone joined by a quartet of prehistoric warriors wielding an assortment of weapons.

A wild symbol can appear anywhere apart from reel one and replaces all other standard symbols except the Scatter.

Kingdoms Rise: Battle Beast has a combination of fresh and classic features, with the main attraction being the potential riches offered by the Progressive Jackpots.

During this feature, any symbols bar the Scatter and Wild gets surrounded by a golden flame, which can happen on any spin. The flame causes the symbol to expand 1 position up or down, left or right.

This feature is also available in Playtech’s Age of The Gods: Glorious Griffin.

The Free Spins get triggered in the usual manner by landing three or more Scatter symbols anywhere on the reels on one game spin.

During the Free Spins, the Golden Expanding symbols are 3x more likely to land during the base game.

It increases a players chances of activating the Battle Beast Ways Plus Feature.

Retriggers are possible, and landing a further 2 Scatters adds another 5 Free Spins, whereas landing 3-6 delivers a full re-trigger and another 8-100 Free Spins.

Collect enough tokens, and players can convert them to various features, one of them being the Wild Beast Respins Feature. There are three versions on offer:

In our opinion, Battle Beast and Shadow Queen are the better games in the Kingdoms Rise jackpot series. The design and game play are outstanding and in particular, the Golden Expanding symbols which can lead to big payouts even on a base game spin.

Moreover, land 3 or more Golden Expanding symbols in the base game to trigger the Free Spins which are almost endless, which can lead to some increased wins. Add the 3 Progressive Jackpots, and it’s a winner.