Scorching Clouds is another slot game that is part of Playtech’s Kingdoms Rise progressive jackpot network. In this medium, to high variance 5×5 grid slot. 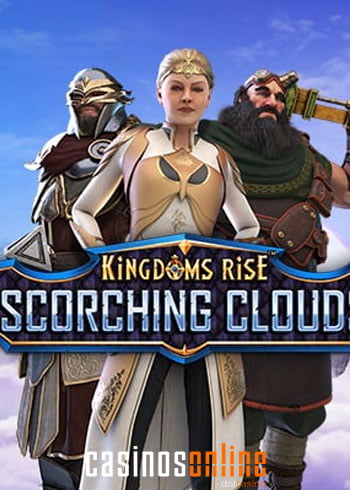 Scorching Clouds is another magnificent slot powered by Playtech for the Kingdoms Rise Jackpot Slots Series.

It’s a five-reel Cluster Wins game playable across all devices from $0.10 per spin to $2000 per spin for those high rollers.

In Kingdoms Rise: Scorching Clouds, the low paying symbols are the different coloured gemstones and payout between 2-9x the stake.

The Empress is the highest paying of all the symbols paying out 100x the stake.

Other high paying symbols include the Knight, Engineer, Telescope, Hammer, and Wrench.

The Golden Ships wheel is the games Wild Symbol and, wherever possible, it substitutes to create additional clusters.

This Spreading Wilds Bonus Feature gets triggered when you land a Wild in the lit-up area within the grid.

Then, two to four Wilds get randomly added to the reels.

The Spreading Wilds Bonus feature ends when there are no more winning clusters or Wilds landing in the part of the illuminated grid.

The Dragons Eggs are the games collectable symbols and leave wilds in their wake. For example, by collecting 6, Dragon Eggs players are awarded 6 Re-Spins.

When this occurs, the usual Cascading Wins Feature is then inverted and the winning clusters remain in place.

Also, all other symbols get removed and replaced by new symbols. When players run out of Dragons Eggs, this feature ends.

In Kingdoms Rise: Scorching Clouds, there are two free-spin features, the Knight Free Games and the Empress Free Games.

Both get triggered by landing at least 3 Scatter Symbols anywhere on the same spin. Players can then select which Free Games feature they want to play.

During game play, tokens get collected, allowing players to purchase Free Spins or Re-Spins. Players need 750 tokens to get the Re-Spins feature and 1000 tokens to enter the Knights Free Spins Feature. To enter the Empress Bonus Round, a total of 1500 tokens are required.

It’s not the highest paying of the Kingdoms Rise slots when comparing it to Guardians of the Abyss or Forbidden Forest.