Get ready for the return of the Warriors in Playtech’s seventh addition – Legend of Elvenstone in the Kingdoms Rise series.

Legend of Elvenstone is a medium volatility slot with 5 reels over 3 rows and includes 10 fixed paylines. 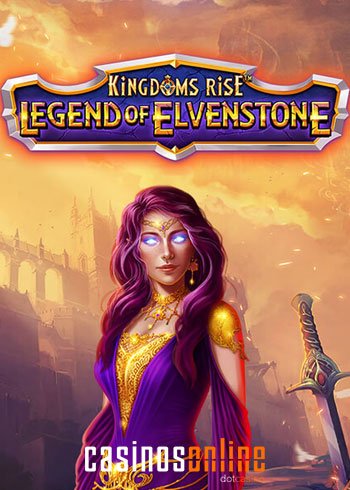 Playtech and Rarestone Gaming take players on an epic adventure where the treasures of Dragons lie in wait. This new slot games features include Re-Spins, Free Spin Multipliers, and 3 Kingdom’s Rise Progressive Jackpots in the main game.

This slot is a 5×3 slot with ten fixed paylines with fire breathing dragons, a sorceress and elemental beings. The design of Kingdoms Rise Legend of Elvenstone is superb with an RTP of 96.48%.

Dare to summon the fiery Dragon and rake in some big wins in the Dragon bonus game.

The low-value symbols you will come across when playing Kingdoms Rise Legend of Elvenstone are Helmets, Swords, Knights, Dragon Eyes and four coloured gemstones.

Higher value symbols include the Fire Breathing Dragons and a Warrior Princess with glowing eyes. The highest paying Symbol is the Male Warrior; land five of them and receive a 750x payout. The Wild Drop symbol is a magnifying mirror, and as you may have guessed, the Dragon is the Scatter Symbol, and he triggers the Dragon Bonus Feature.

Pay Table for five of a Kind on a payline:

When four or more Dragon symbols appear on reels 1 and 5 only the Dragon Bonus gets activated. Players begin with 3 Re-spins, and the middle reels spin independently, whereas reels 1 and 5 remain static. If a Dragon Eye symbol lands, it transforms into a coin with the value of 1x, 2x, 3x, 5x, 8x or 10x your total stake. The coin gets held in place for the feature duration, and the number of re-spins resets to 3.

Wild Drop symbols (transparent eye) can appear above the reels or on top of any symbols on the middle or bottom rows.

Once the Wild Drop lands, it moves down a row on the next spin until it reaches the bottom row.

When a Wild Drop symbol appears over a man symbol, it moves to the top row for the next spin giving you more Wilds on the reels.

On the other hand, should a Wild Drop land over a woman symbol it remains in position, and a 2x Multiplier appears on the Wild Drop Symbol.

If more than 1 Wild Drop Symbol with a Multiplier appears on a winning payline, the highest Multiplier gets added, reaching as high as 20x.

Kingdom Rise: Legend of Elvenstone has three Jackpots which are:

Depending on your bet amount per spin, some nice wins can be expected as Legend of Elvenstone is a medium volatility slot with an RTP of 96.48%.