Legion Uprising is a 25 payline slot game featuring a new Kingdom by Playtech in the Kingdoms Rise slots series.

Feature games include the 3 Progressive Jackpots and the Mighty Kings free games feature.

Legion Uprising slots has an RTP of 96.02% with a medium to high volatility. 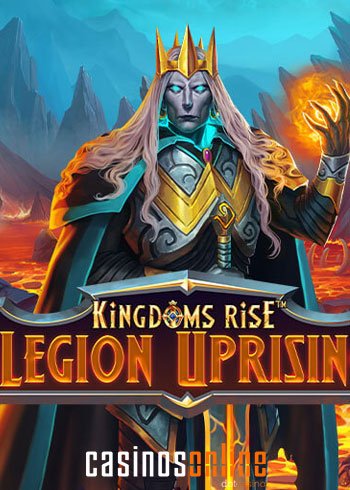 This slot game has three Progressive Jackpots with the Epic Jackpot starting at $100,000 and keeps increasing until it gets won.

Winning combinations must appear on a win line from left to right, however, wins pay anyway during the free spins bonus game.

Stakes in Kingdoms Rise Legion Uprising start at $0.10 per spin, rising to a massive $2000 per spin.

Legion Uprising has an RTP of 96.02% and a medium to high volatility.

This magnificent online video slot has a max win of 18,000x your stake or 24,000x when the 8x multiplier gets applied during the games free spins.

The symbols are fantasy and supernatural creatures such as a fire breathing dragon, skeletons, warriors, magical books and the Queen.

Also, there are four lower value colourful gems and stones.

The Mighty Queen is the games wild symbol and the highest paying.

The fire breathing dragon is the next most rewarding symbol, and when players land 5 dragons on a payline, it pays out 40x your total bet.

To trigger the Mighty Kings Free Games feature, players need to land 3, 4 or 5 Scatter symbols anywhere on the reels.

When this occurs, they receive 3, 10 or 100x their total stake respectively and 10 Free Spins. Additionally, which come with a sticky wild, the sticky wild locks into place on reel 3 for the duration of the feature.

The action starts with a 2x multiplier, which increases in value by 1 after every second free spin.

At the end of the Mighty Kings Free Spins Feature, there will be a 6x multiplier active.

Like all the other games in the Kingdoms Rise series, you have the option to buy a bonus feature in the unique Feature Shop once you have collected the allocated amount of tokens.

Players can win up to 15 game tokens in each spin, you can then buy any of the following three features from the Feature Shop.

These three bonuses cost more than the entry bonuses at 300 tokens:

All the Kingdoms Rise Jackpots are randomly triggered, and the bigger the stakes, the better your chances of landing one of the Progressive Jackpots, which are:

It’s a medium to high variance slot with top-notch graphics and soundtracks with an added bonus of collecting tokens to use in the Feature Shop.

Additionally, the Feature Shop is an added advantage for player who want to buy bonus games. Unfortunately this feature is not available for players in the United Kingdom.

Spin the reels and enjoy a hell-raising experience. If you are more a cluster win fan, try out Kingdoms Rise, Scorching Clouds slot.

Finally, another exciting Jackpot Series is the ever popular Mega Moolah Slots with over 15 exciting themed jackpots slots to choose from.