Medusa and Monsters – Age of the Gods

Medusa and Monsters is the first six reel slot in the Age of the Gods slots series offering 164 paylines under license by Playtech.

Medusa unleashes Expanding Wilds and shifts reels in the bonus round petrifying high paying symbols and locking them to the reels. 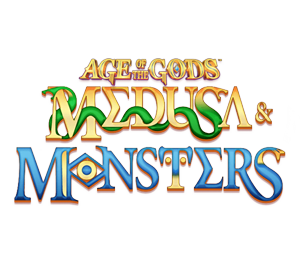 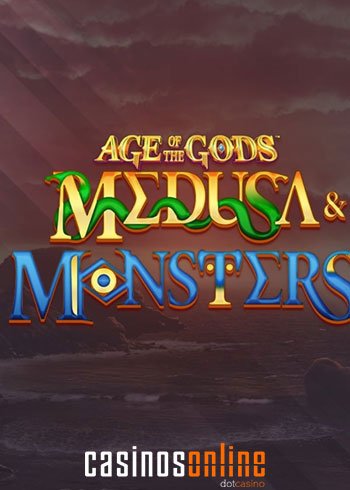 Medusa and Monsters is a medium to high variance slot with six reels and a 164 paylines.

It is equipped with four pooled Progressive Jackpots those being the Power, Extra Power, Super Power and Ultimate Jackpots with the latter often reaching six-figure sums.

In this Age of Gods, slot players enter the deep dark world of Greek mythology where the Gorgon Medusa with living snakes for hair reigns supremely.

The background is a rocky beach with splashing waves in a dusky time frame.

This medium to high variance slot games RTP is 96.09% which is reasonably good for a slot of this magnitude.

The symbols in Age of the Gods: Medusa and Monsters appear stacked on the reels, up to seven symbols high.

There are four varying gems in blue, green, red and diamond colours which are the low-value symbols.

The medium value symbols are a Helmet, a Dagger, and an Ancient Greek Warship.

The games premium symbols are Cerebus, Minotaur and Aphrodite.

Medusa herself is the games Wild Symbol, and she expands to cover the entire reel whenever it appears on a spin.

The Scatter Symbol in Age of the Gods: Medusa and Monsters are the Ancient War Shield, and they appear in Stacks of up to two symbols on reels 2, 4 and 6 only.

Players need to land Scatters on reels 2, 4, 6 on one spin to trigger the Medusa’s Gaze Free Feature.

When this happens, players are presented with three War Shields and must pick one to reveal one of the three premium symbols.

As a result, which will be petrified by Medusa and lock into place during the Bonus Round.

The Medusa Wild starts on the 6th reel and is a walking Expanding Wild that moves to the left after each Free Spin.

She only unfreezes when she overlays a frozen symbol.

The Free Spins Feature ends when Medusa reaches the first reel. This feature can also be re-triggered.

Age of the Gods Medusa and Monsters Progressive Jackpots

In Age of the Gods slot game, Medusa and Monsters have four Mystery Progressive Jackpots all randomly triggered adding to the exciting game play.

Players stand a chance at winning one of the four Progressive Jackpots by matching three identical coins which will reveal the Jackpot they have won.

The four Age of the Gods Progressive Jackpots are:

In conclusion, Playtech’s Age of the Gods scored a winner when they launched Medusa and Monsters.

Players can delight in this fantasy-themed slot game with several different features in this six-reel slots game that offers 164 different ways to win as well as four Progressive Jackpots boosting your bankroll.

Take Medusa with you on your mobile device anywhere anytime as Medusa and Monsters is Smartphone ready!

Finally, for additional chances at other progressive jackpot slots, you can play the worlds most popular jackpot network, Mega Moolah.

Play Medusa and Monsters At These Excellent Casinos