Mighty Midas – Age of the Gods

Age of the Gods Mighty Midas by Playtech is a Progressive Slot that has the knack of turning rags into riches.

It also offers a host of other golden features where symbols can become Wild activating the Wheel of Fortune.

There are also four Free Spin Bonuses and Multipliers up to 30x your bet.

Additionally, there is a treasure chest filled with stacked symbols where wins of up to 500x at maximum bet when you win five of a kind. 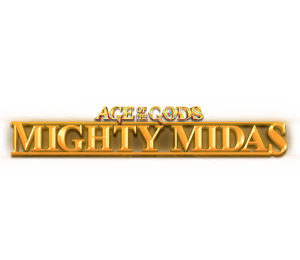 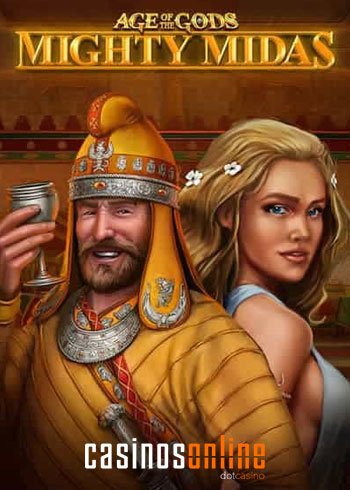 Mighty Midas is another slot in the Age of the Gods Jackpot Series by Playtech, based on Greek God Mythology.

It is a slot with five-reel, 3 rows and 40 paylines and the main character is King Midas who is known for turning everything he touches into gold.

This great fable is presented to players royally, and although King Midas touch proved to be a fatal curse to him its indeed the opposite for online gamblers.

The biggest draw-card is the four Progressive Jackpots where the jackpot game is triggered randomly.

The game also has a Golden Touch Feature which is induced by a golden hand, and yes you have guessed right, everything it points to turns to gold.

Age of the Gods, Mighty Midas is a medium to high variance slot game with an RTP of 96.34%

The low paying symbols in Age of the Gods Mighty Midas include Fruits, a Rose, Wine and Roasted Chicken.

Midas himself is the highest paying symbol along with his Royal Family, Princess Marigold and his son Lityerses.

Keeping in line with the theme God Dionysus and his mentor Silenus also make an appearance on the reels.

A golden brick with the letter W inscribed on it is the Age of the Gods: Mighty Midas Wild Symbol. It replaces all the other symbols except for the Scatter.

The Scatter Symbol is a Pentagram in rainbow colours, and it appears on reels 1 and 5.

Additionally, it assists in unlocking one of the five bonus feature games.

The Midas Touch Symbol is the Golden Hand with one finger of the hand, always pointing to the left.

This symbol appears on reels 3, 4 and 5 and turns the symbol it indicates towards into Wild.

This Feature is rather exciting, as the entire theme of the game is based on the Golden Touch.

In this feature, any symbol the Midas Touch symbol points to turns into a Wild.

Furthermore, it collapses after making the symbol Wild, allowing for more winning combos.

If it points toward a Golden Wild, it increases the Multiplier by 1x.

In the Emerald bonus game, the Scatter symbols turn to reveal one number which is multiplied, giving you the Multiplier you will be awarded.

In this feature, one of the randomly selected high paying symbols is chosen as the Wild for that spin rewarding you accordingly.

In this round, players receive 7 Free Spins with Multipliers.

The Multipliers range from 2x up to 10x. Players acquire these Multipliers on every spin that generates a win.

When players trigger this Bonus Feature, they receive 3 Free Spins in which all the Midas Touch Symbols are double stacked.

As a result, these turn the symbols into Wilds and collapse, making new winning combinations resulting in some big wins.

As in all the Age of Gods series, the Progressive Jackpot game is triggered randomly.

In conclusion, Mighty Midas is another excellent addition to Playtech’s Age of the Gods series. It consists of the generous use of high-quality audio and visual effects with symbols that are simple yet effective in keeping with the theme.

The golden egg in Age of the Gods Mighty Midas is undoubtedly the four Progressive Jackpots.

A further great addition to the Age of the Gods slots is Norse Ways of Thunder offering paylines up to 3125 and the Return to Player (RTP) is at 96,61%.