Norse Legends is the latest to join Playtech’s Age of the Gods Norse mythology slots series. It’s a slot played on 5 reels with 3 rows and 20 fixed paylines.

Players can create winning combos by landing two or more Norse God symbols or 3 or more Rune Stones from left to right on a payline starting from reel 1.

Norse Legends comes with six Bonus features, three Jackpots, and 10,000x your stake wins in this highly volatile slot with an RTP of 96.31%. 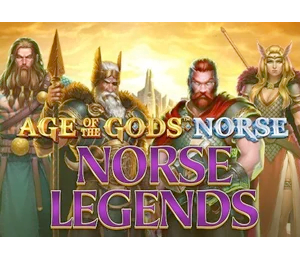 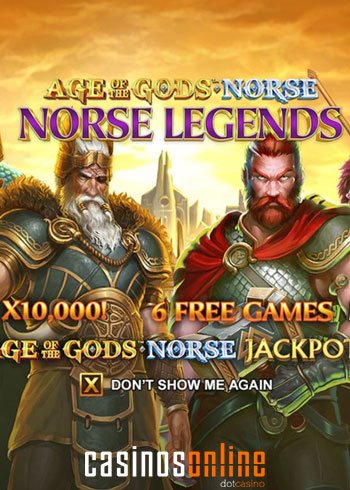 The Legends of Asgard Bonus comes with 6 different feature games when triggered, it also offers Pick me prizes, Free Spins with an array of Wild and Multiplier extras.

As previously mentioned, players also have a shot at landing one of the three Progressive Jackpots, which get randomly triggered.

Age of the Gods Norse, Norse Legends is a high volatility slot game with an RTP of 96.31%.

Norse Legends has a Norse mythology theme with Valhalla in the distance, and the reels have 3 lower value runestone symbols.

There is also an assortment of Norse deities, including Loki, Freya, Thor and Njord.

The most lucrative symbol is Odin, and 5-of-a-kind pay up to 50x the stake.

Finally, the wild symbol which substitutes for other game symbols also pays up to 500x when 5 instances land on a single payline.

Age of the Gods Norse Legends has 6 Bonus Features, and the main attraction is the Legend of Asgard is where all the bonus feature games are selected.

Players have to land 3, 4 or 5 Gold Scatter symbols anywhere on the reels to trigger this feature.

Once this happens, players get taken to the pick a Bonus Feature, of which there are six. Initially, only two get unlocked, and they are the Norse Legends Cash and Freya free games feature.

However, each time a player triggers the Legend of Asgard Bonus, another one of the 6 features gets unlocked, and here’s what they offer:

There’s more once a player has completed any of the above features, they have a chance at a repeat performance.

How, well you get shown 9 gold coins, behind the coins are Bonus and Loki symbols.

Uncover three Bonus symbols, and you can play the feature again.

Should you find three Loki symbols, then you’re taken back to the initial base game.

Also, Norse Legends is part of the Age of the Gods Norse Jackpot network where you could win one of 3 jackpots, namely:

In conclusion, Age of the Gods,  Norse Legends is probably the best in this Jackpot Slots series.

Its design is fabulous with the 6 Legends of Asgard bonus features being the star of the game.

There are also Multipliers that increase after every second spin, and the 4x Multiplier is where you could win the 10,000x stake win.

Norse Legends slot deserves its place as one of the Best Slots to Play!