Norse Ways of Thunder – Age of the Gods

Join Thor in the Age of Gods Norse Ways of Thunder as he fights Dragons across this five reel slot.

Unlock 6 levels in the Ways of Thunder, Lightning Feature to play up to a huge 3125 paylines. 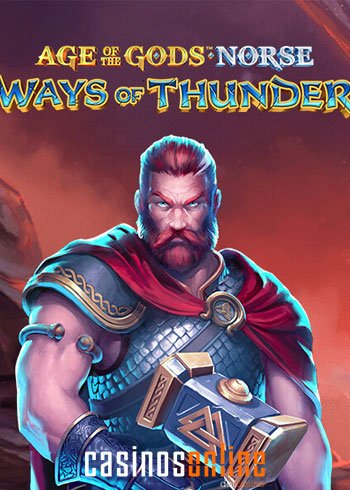 Another battle is about to commence in Playtech’s Age of the Gods, Norse Ways of Thunder Progressive Jackpot slot.

Ways of Thunder slot is the second game in the Norse series and focuses on the renowned Norse God, Thor and his Mighty Hammer.

The graphics in Norse Ways of Thunder are exhilarating with classic rune stones, blizzard conditions in a mysterious and looming landscape.

The setting is dense fog and snow-capped islands floating in the air and plays out on five reels, five rows and as many as 3125 additional ways to win.

Age of Gods, Norse Ways of Thunder boasts incredible features, and the Lightning Feature is one of them.

When this feature is triggered, it increases your paylines with each win you score.

There is also a Free Spins Bonus where players can win up to a mighty 50 Free Spins not forgetting the three Progressive Jackpots.

Unleash the storm to a universe of prizes in Norse Ways of Thunder as you spin those reels on your desktop or mobile devices.

This high volatility slot game has an RTP of 96.61%, and players can win up to 1500x their stake outside of the Jackpots.

In Age of the Gods Ways of Thunder, the low value symbols are Rune stones.

There are also three higher paying animal symbols which are Ravens and Mountain Goats.

Also, the other symbol the Red Dragon can land stacked.

The Wild Symbol in Ways of Thunder slot game is Thor’s Hammer.

The Hammer substitutes for all other symbols and will step in to create winning combinations.

The Scatter Symbol in Age of Gods Norse Ways of Thunder is a Golden Bonus Coin.

Land three coins and you unlock the free spins bonus round.

The Lightning Feature is the games draw card as you have to work your way up to gain maximum ways to win and adds to the excitement.

When you first spin the reels, you will notice some of them are blocked; however, they as you land successive winning spins they are unlocked.

The Lightning Feature has six levels, and during this feature, you will also unlock symbol positions when you land 2 Scatter Symbols on the same spin.

For each level, you unlock the number of paylines increase but be careful as you lose you also go down a level.

Each successive win goes as follows:

Thor’s free spins bonus game is triggered by landing 3 of Thor’s Hammer symbols on any of the 5 reels in a single spin game.

Whenever you land 2 Scatter symbols in the Bonus game, you will win a further 2 Free Spins.

What’s good to know is the fact that during this feature your maximum paylines can only increase not decrease, so even if you lose on one spin you will remain on the same level of paylines.

Age of the Gods Norse Ways of Thunder’s Progressive Jackpots

There are three Jackpots to be won in Age of the Gods Norse: Ways of Thunder. There is no specific Jackpot Round or Feature to trigger them.

The Jackpots are randomly triggered and can happen at any time. The more significant your stake, the better your chances of triggering the Jackpots.

The three Age of the Gods Jackpots are:

Playtech has once again excelled in their Age of Gods series Norse Ways of Thunder. it has a sought after theme boosted by incredible graphics and features.

Ultimately, Ways of Thunder has an RTP of 96.61% which for a 3 tier progressive jackpot slot is rather impressive.

Ways of thunder is a high volatility slot, so its the features and bonus games where you can really start to enjoy the game.

Play Norse Ways of Thunder At These Excellent Casinos