Queen of Alexandria is another addition to the WowPot jackpot slots series with an impressive Egyptian theme.

The newly revamped WowPot series is the brain child of Microgaming in collaboration with Neon Valley Studios with an RTP of 96.00% overall.

Queen of Alexandria is a medium volatility slot game offering a max win in the standard game version is 2,500x your bet stake. 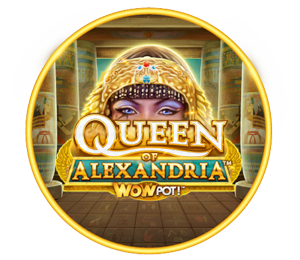 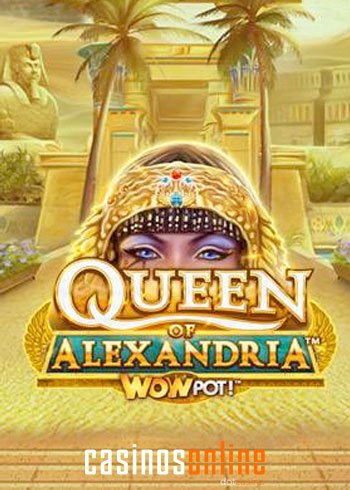 Join the Egyptian Royalty in the Queen of Alexandria WowPot powered by Microgaming in collaboration with Neon Studios.

It’s 5 reels, 3 rows, and 10 payline both ways jackpot game which means players win on combinations from reels 1 or reel 5 in this medium variance Jackpot slot.

The main extras in Queen of Alexandria are expanding wilds that award re-spins whenever they appear.

Microgaming has used its innovative skill and created two different versions of this WowPot game.

The first one offers players a chance to land 4 fixed Jackpots worth 2500x your stake.

The second version is part of the Progressive Jackpot network with a colossal Jackpot worth in the region of $2 million.

The volatility in both versions of Queen of Alexandria WowPot is medium, and the slot has a hit frequency of 21.69% during the Jackpot version and 22% during the standard version.

The different coloured gemstones are Queen of Alexandria WowPot’s low paying symbol, each with Egyptian hieroglyphics inscribed on them.

The higher paying symbols are Lucky 7, the Egyptian Cat God Bastet which is the most lucrative symbol paying out 5, 20 or 25x your total stake when you land 3, 4 or 5, respectively.

The stunning Cleopatra is the game wild symbol and has some magical powers, which we will discuss below.

Cleopatra is the games Wild symbol, and when regal stunner lands on the middle three reels, she substitutes for all standard symbols and assists in forming winning combinations and triggers the Expanding Wild feature.

Whenever Cleopatra symbol lands, she expands and fills the whole of that reel.

The Cleopatra wild also triggers the Re-spin feature. Here the Expanded Wild locks into position for the re-spins.

The process gets repeated when new a wild lands on any of the central reels during the Re-Spin feature.

Moreover, should a player land a third Cleopatra wild, not only do they receive another re-spin, but all three middle reels turn totally wild.

You get to play the Progressive Wheel Feature if you are playing the Queen of Alexandria WowPot version.

Once the feature gets triggered, you spin the Jackpot Wheel awarding 1 of 4 Progressive Jackpots, and they are as follows:

In the standard Queen of Alexandria slot game, you also have the Jackpot Wheel.

As a result, you have a chance of landing 1 of 4 jackpot prizes.

Land 2, 3 and 4 diamond symbols on the same spin and the jackpot wheel is triggered.

Players then get to spin the Jackpot Wheel and depending on where the pointer lands, and they’ll win one of the following prizes:

Queen of Alexandria is a simple slot and one of the better Ancient Egypt Jackpot Slots releases of late.

The simple game play delivers some decent action courtesy of the Expanding Wilds and Re-spins.

The Mega Jackpot stake in the standard version is decent, but the WowPot Jackpot of $2 million is the draw card as it will make every player regal dreams a reality.

Play Queen of Alexandria WowPot At These Excellent Casinos