Red Wizard is another addition to Playtech’s Fire Blaze Jackpot series. It’s a feature rich game with 50 paylines across 5 reels.

The highest payout in Red Wizards base game is 2400x your bet excluding progressive Jackpot wins. 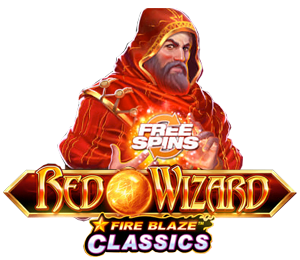 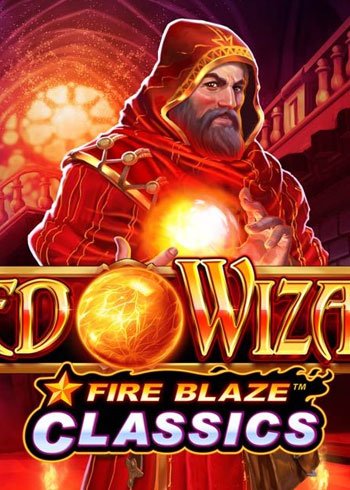 Red Wizard is another slot by Playtech in conjunction with Rarestone in their ever-growing collection of Fire Blaze slots.

There are nine regular symbols in the Red Wizard Fire Blaze slot. The lower value symbols are the classic Royals.

Also, the games Red Wizard is the base games Wild symbol.

The Fire Blaze Respins feature gets triggered when seven or more Flaming Ball symbols land on the reels during both the base and bonus games.

The Flaming Ball symbols then become sticky, and players proceed to the Bonus game and receive 3 Respins.

During the base game, only the Bonus Balls and Stars can land on the reels.

Flaming Balls have a 1x – 50x random cash value attached to them, and anytime a new symbol lands, they become sticky, and the number of Respins gets reset to three.

When the feature ends, all the Star symbols transform, awarding players with one of the three Jackpots, the Mini, Minor or Major Jackpot.

Land three or more Scatters to trigger the Free Spins feature gets where players receive 6 Free Spins initially, and once they do, they receive six Free Spins.

The Free Spins feature operates similarly to the base game; however, the one difference is that reel 3 enhances when Wilds and Flaming Balls land on that reel.

During the Free Spins feature, the Wilds on reel 3 come with random Multipliers of 2x, 4x, 8x or 16x, and they get applied to any Wild symbol win.

Free Spins can be re-triggered with 3 or more scatters, adding 6 more spins for you to enjoy.

The Hold and Win or the Fire Blaze Respins Feature is key to the Red Wizard slot.

It requires a specific number of Pearl symbols in view.

Once players have landed the needed number of Pearl symbols, they turn sticky during the Respins.

Also, any additional Pearls landing on the reels will see the Respins reset to three.

Alternatively, if you’re aiming for the top Jackpot, you need to ensure all 15 positions have Pearls on them, and you walk away with the Grand prize of 2000x your stake.

There four Jackpots in Red Wizard’s Fire Blaze which get randomly triggered, with the following prize values:

Red Wizard is another perfect addition to the Fire Blaze Slots Series, with more features added to their Hold and Win Mechanics.

The unique Free Spins feature and the four fixed Jackpots with a maximum win of 2000x your stake add to the Red Wizards magic.