Reign of Ice is the fourth kingdom in the Kingdoms Rise Jackpot slots series by Playtech. Play 5 reels over 3 rows with 25 fixed paylines.

Reign of Ice is a medium volatility with an overall RTP of 96.26%.

Special game features in Reign of Ice include unlimited respins with multiplier boosts to wild and locked game symbols. 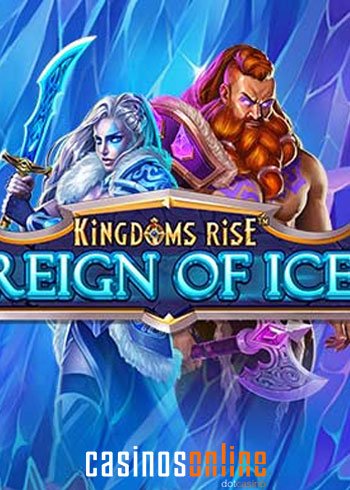 The Kingdoms Rise: Reign of Ice slot has 25 pay lines that pay from left to right as you delve into Norse mythology slots by Playtech.

Reign of Ice comes with some chilly elements heightening your chances of winning some lucrative cash prizes, including Hammer Wilds, Hammer Re-spins, Multipliers, and the three Progressive Jackpots.

There is also the Kingdoms Rise shop where you can purchase the Barbarian and Valkyrie Re-spins feature giving you Re-spins with Multipliers.

Join the ice Barbarian and the Ice Valkyrie on a treacherous reel journey through an undiscovered frozen world.

Enter the icy fantasy world on desktop or mobile from $0.10 to the high roller friendly amount of $2000 per spin.

It’s a medium volatility game with overall volatility of 96.08%, of which 0.99% contributes towards the Jackpots.

The remaining 3% gets reserved for the game tokens.

The two main character symbols are the Ice Valkyrie and the Ice Barbarian, and they are the highest paying symbols.

The Blue crystal logo with the gold frame is this games Wild, and the Hammer is the Scatter Symbol and appears on reels 3, 4 and 5 only.

The Frozen Hammer Wild will only land on reel 2 replacing all game symbols.

Should the Hammer Wild, Ice Valkyrie, or the Ice Barbarian symbols land on the reels simultaneously.

The Hammer gets released from the ice triggering the Re-spins Feature.

When this happens, Wilds can land on reels 3, 4 and 5. And freeze to the reels.

If the Hammer Wild Symbol lands on reel two, all regular Wilds are unfrozen and become a Multiplier Wild.

The Hammer Re-Spins Session will only end when there are no more hammers left in the Multiplier Bar.

Players have the option of purchasing this feature game from the Kingdoms Rise Shop once you have collected 800 or more game tokens.

The active Multiplier will be applied after each Re-Spin only if new Ice Barbarian Symbols land on the reels.

This feature initially gives players 3 Re-spins and all of the Ice Barbarian symbols freeze until the feature ends.

The Valkyrie Re-Spins Feature is also available at the Kingdoms Rise Shop for 1000 tokens.

When playing this feature, it’s important to note that the frozen 5x Multiplier is located above every reel, and they are the Ice Valkyrie symbols.

Each of these symbols will freeze and reward players with some cash bonuses when they appear—land 3 of the Ice Valkyrie symbols to trigger the 5x Multiplier.

Reign of Ice is a Kingdoms Rise progressive jackpot slot, and the jackpots are triggered randomly and they are, namely:

Reign of Ice is the fourth Kingdom in Playtech’s Kingdoms Rise jackpot series, and it delivers substantial wins and loads of fun and immersive game play.