Sands of Fury is an ancient city ruled by Queen Raz in Kingdoms Rise slot game.

Queen Raz and four of her warriors can randomly appear as wilds and can activate the Wild Fury feature game.

Sands of Fury is a high Volatility slot with an RTP of 96.26% while the Wild Fury bonus produces Golden Locked Wilds locking to the reels.

Play Sands of Fury At Any Licensed Online Casino 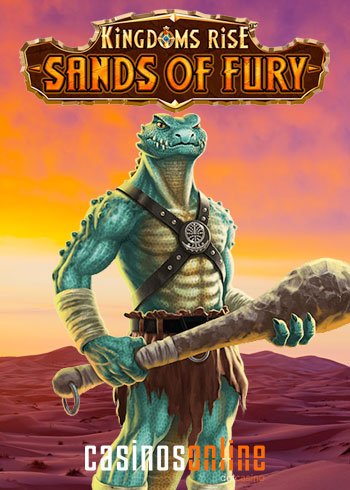 Sands of Fury is a Kingdoms Rise video Slot by Playtech with 5 reels and 20 fixed paylines.

Wins are awarded for three to five matching symbols on a line as you venture deep into the arid desert with its gripping soundtrack in this heroic, action-packed slot.

Courage is the name of this game, and the Queen and her mighty warriors will reward you handsomely as you venture through the treacherous desert, be it on your desktop or mobile.

Enjoy Re-Spins, locked Wilds, and the Token collection feature, which players can use to buy extra bonus feature games that may boost the bankroll.

Spin away on Sands of Fury as you edge closer to the chance at winning one of the 3 Progressive Jackpots.

The slots RTP is at 96.26% but remember, the tokens contribute with 0.99% and the Progressive Jackpots with 3%.

The symbols at the low end are the blue, purple, turquoise and pink gemstones. They pay out 0.8x-1x your bet for a five of a kind.

Next are the five characters: the Sorcerer, General, Lizard Wizard, Swordsman, Archer, and the Gold Queen herself. Land five on a line to win 3x up to 7.5x your bet.

Sands of Fury has no Scatter symbol, however, all the character symbols can transform into a Wild when they re-trigger the Re-Spins Feature or when players land five Wilds on a payline receiving 12.5x their bet.

In Sands of Fury, the Character Wilds play a crucial role in hitting big wins and activating the Wild Fury Feature, as is the extra horizontal reels at the top of the game window.

Each of the characters gets strategically positioned above one reel, which contains four possible outcomes and can display any one of the following feature positions:

This feature is available to purchase when you have collected 500 or more tokens.

A Wild Beast appears on the screen in this feature and will walk from right to left, hitting the reels.

He turns random positions into Sticky Character Wilds, and the number of Sticky Wilds depends on the number of game tokens you used.

The Queens Ritual Bonus can be purchased for 300+ Tokens, and this is a pick and click bonus game where Her Majesty will handsomely reward you with multipliers, cash prizes and extra clicks.

The blank symbol with the chain across it is a symbol you want to avoid seeing above your active reels as it ends the feature and unlocks the wilds in the next spin.

Unlike the arid desert scene Kingdoms Rise, Sands of Fury has an oasis of Progressive Jackpots.

The jackpots triggers randomly and can happen on any spin with any bet amount.

Kingdoms Rise and the Sands of Fury is a pretty exciting slot game.

Great cash prizes up for grabs when playing the Character Wilds and Wild Fury Feature, at the same time collecting important game tokens.

Travel to any kingdom to buy Feature Games from the Kingdoms Rise Feature Shop, remember that Sands of Fury is a high volatility slot with an RTP of 96.26%.

Also, rated one of the best Jackpot slots in the world is Mega Moolah, there are numerous themed slots in the series to choose from.

Importantly, take a look at the totally revamped and additional themed slots in the new WowPot Jackpot Series.

Finally, In this WowPot series Poseidon Ancient Fortunes Megaways slot with 117,649 paylines appears to be the most popular slot.