Tundra Wolf is the latest exciting addition to the Fire Blaze Slots series. Set with a snow backdrop, Fire Blaze fans could scoop an epic win of up to 2000x your bet.

Tundra Wolf offers 5 reels and 40 fixed paylines including, including free spins that can be re-triggered in the rewarding Hold and Win Feature. 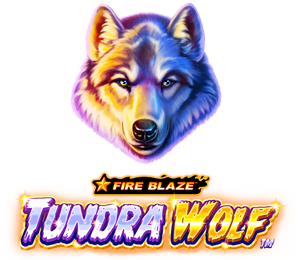 As players venture into the icy wilderness, there will be no shortage of action with respins central to the action as well as two different Respin Features.

Each offering players the chance to land jackpot prizes worth up to 2000x their total stake depending on the game mode you choose.

Head to the frozen wilderness on your desktop, laptop, tablet or smartphone in this new Fire Blaze slot game by Playtech.

Real money gambling bets in Tundra Wolf range from $0.20 up to $500 per spin, regardless of which game mode you have selected.

It’s a medium to high variance slot with an above-average RTP of 96.46%, with the bigger wins coming from the Jackpots.

An icy woodland is Tundra Wolf’s design with fantastic comic book visuals and an ambient soundtrack.

The reels are filled with lower value A to 10 Royals appearing alongside a selection of wild animal symbols. The symbols include an eagle, snow leopard, moose and buffalo.

The Wolf is the wild symbol and can appear on all 5 reels in Fire Blaze Classic Mode and reels 2 through 5 in Fire Blaze Golden Mode.

Scatter symbol is the Howling Wolf symbol and is present in both rounds paying 1x, 10x or 50x your total stake for landing 3-5 respectively.

Rounding out the symbols are the Bells and moons; however, they depend on the selected game mode.

Also, the features you land vary depending on the player’s selected game mode, and prizes in each mode differ.

When players land 3 or more of the Howling Wolf Scatter on the same spin, the Free Spins Feature gets triggered.

Players receive 6 Free Spins, and a 3×3 colossal symbol is in play—the 3×3 symbol shifts to a different position on the reels on each Free Spin.

As a result, land 3×3 Mega Scatters, and you will re-trigger six more Free Spins.

The Hold and Win Feature gets triggered during the Free Spins should a Mega Moon or Mega Bell land in view.

Firing up this feature, players need first to decide which mode they prefer playing in as this has an impact on which streak respin feature gets triggered.

Select the Fire Blaze Classics mode, and the Moon symbols are in play.

Land 6 or more of these symbols on the same spin, and the Fire Blaze Classics Hold & Spin Feature gets triggered.

The triggering Moons get held in place, and players receive 3 Respins.

If a new Moon lands, it o locks into place, and the Respins reset to 3.

Once all the Respins get used up, the cash values attached to the Moons get added together, giving players their overall cash prize total.

Keep your eyes peeled for the Star symbols as they award Jackpot prizes.

Fill all the positions on the reels, and you not only win all the Moon prizes but the Grand Jackpot.

Below are the values attached to the Jackpots in the Fire Blaze Classics mode:

Six Bells are required to trigger this feature. The triggering Bells transform into Coins, each with cash values attached and held with 3 Respins to follow.

The difference in this mode is that the value attached to each coin gets added together and awarded each time a new Bell symbol lands.

Land a new Bell symbol, and the Respins reset to three more spins.

Jackpot prizes can also be won during this round when players land Star symbols.

When the whole grid gets filled, you win the Grand Jackpot, which varies from those in the Classics Hold & Respin Feature.

The Jackpots are as follows:

The streak respins are rewarding, and the Jackpot wins are even better.

When it comes to the Free Spins, they come with something extra courtesy of the shifting colossal symbol blocks.

Put this all together, and you have another winner in their addition to their Fire Blaze Jackpot slot series with an above-average RTP of 96.46%.