Wonder Warriors Age of the Gods

Wonder Warrior is the latest in Playtech’s Age of the Gods Jackpot slots series. 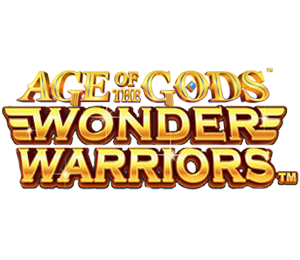 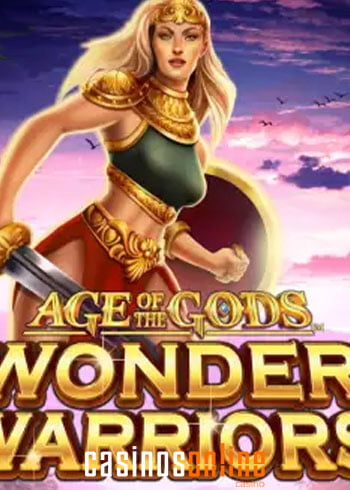 Time to take on the Gods in Playtech’s new Gods Wonder Warriors Jackpot slot in the series, Age of the Gods.

Like all of Playtech’s Age of the Gods slot game, Wonder Warriors have a glossy high spec feel to its Ancient Greek theme based on the Amazons, the women warriors.

These female warriors received mythological immortality from the Greeks.

There’s a Pantheon of Power On Reels Feature where all 5 gods line up to award cash prizes.

Also, an Age of the Gods Bonus with 4 Free Spin features and multipliers of up to 5x and wilds on every Free Spin.

The maximum win per spin is 10000x your total stake, excluding the whopping Progressive Jackpot wins.

Bet levels in this Progressive Slot range between $0.10 to $225 per spin across all platforms and devices. Wonder Warriors is a high variance slot with an RTP of 96.50%.

An Army of Symbols

Set in a forest backdrop shrouded in mist, the reels are made up of A to 10 royals on tablets or stone.

The axes, spears, helmets, bows and arrows and the 3 Wonder Warriors are the higher paying symbols.

The Warriors are Hippolyta (bronze), Antiope (green) and Thessalia (blue).

Hippolyta is the best-paying symbol and pays 1, 1.5 or 5x your total stake when you land between 3-5 symbols in combination.

Other symbols include Hades, Hercules, Poseidon and Zeus and the two latter symbols pay out 25x the stake.

Age of the Gods Wonder Warriors Wild is the white horse.

It can only land on the middle three reels and substitutes for all the standard symbols except the Scatter and pays up to 500x the stake.

Rounding it off is the Scatter symbol which is the Shield and pays up to 100x the stake.

It’s not a Megaways slot; however, it is slightly unusual in that the number of ways to win can change with each spin.

Wonder Warriors has 3 Bonus features, and the main extra is the Free Games feature, where players can choose from 4 different Free Spin features.

During this feature, the reels can randomly change shape on each spin ranging from a minimum of 3 rows high to a maximum of 6 rows high.

It impacts on how many different ways players get to form winning combinations on a particular spin. That means between 243 and 7776 ways to win.

Land 3, 4 or 5 golden shields to trigger the Free Spins feature anywhere on the reels.

Pick one of the four Free Spin options, and each one gets played on a different size machine.

The Free Spins choices are as follows:

The final option gets locked until you’ve triggered the Free Games feature three times or more.

Players get to play with unlimited Free Spins because when they land 2 or more shield scatters on a spin, they receive another 3 Free Spins.

The Age of Gods Wonder Warriors comes with 4 Progressive Jackpots, and the jackpot feature gets triggered at random on any spin.

You then get to pick from 20 coins, and behind each one lies a symbol. That symbol is the jackpot you win.

Age of the Gods Jackpots seed as follows:

This Age of the God slot game is unique thanks to its shifting number of ways to win, similar to a Megaways slot.

Visually it’s magnificent, with the most significant wins coming when you play the 7776 ways to win in the Free Games feature.

One Free Spin on the maximum win lines could see you cash in on 10,000x your stake, and that’s excluding the  Age of the Gods Ultimate Power Jackpot.

Finally, remember that Wonder Warriors has a High Volatility and an RTP of 95.54% even with game multipliers, 4 free spin features its still an enjoyable slot if you have a large bank roll.