Kingdoms Rise, Forbidden Forest is a 5 reel, 576 ways to win slot from Playtech, where players get to introduce themselves to fearless Warrior Maidens.

Forbidden Forest progressive jackpot games can be played on all mobile devices from as little as $0.10 per spin, and for high rollers, they can place wagers as high as $2000 per spin. 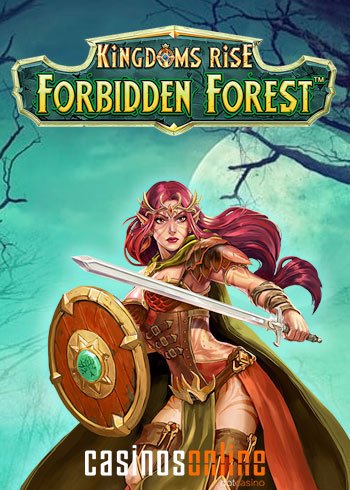 Kingdoms Rise: Forbidden Forest is part of Playtech’s Progressive network series. It offers players 576 ways in which to win on reels that are 3x4x5x4x3 rows high.

Forbidden Forest is all about the re-spins with roaming wilds, and players can upgrade the feature by using their tokens to get stacks of Scatters that are up to 3 magnificent symbols in height.

Three Progressive Jackpots are up for grabs, all triggered randomly, and only the brave will reap the benefits by entering the Forbidden Forest.

The visuals in Forbidden Forest are magnificent and transport you to the mystical forest shrouded in mist which is enveloped in gemstones that glimmer in the dewy haze.

When playing Kingdoms Rise: Forbidden Forest, real money players only have to spend a minimum of $0.10 and a maximum of $2000 per spin.

The gemstones are the low-value symbols followed by the warriors, bears and panthers that pay a higher amount on wins.

Finally, the flame-haired sword yielding Warrior is the highest paying symbol and rewards you with 20x your bet when you land 5-of-a-kind.

The Green Symbol is the Wild, whereas the Scatter is represented by a Golden Owl Mask triggering the Re-Spins Bonus Feature and transforms into a roaming Wild that shifts with each spin.

Kingdoms Rise: Forbidden Forest has a unique shop, and it’s all about collecting tokens to buy features from the actual Kingdoms Rise Shop with the Night Owl feature being one of them.

When players have accumulated 300 Tokens, they can purchase 3 re-spins with a stack of 2 Scatters.

The Scatters behave as Wilds and constantly move across the reels.

When players have 750 Tokens, they purchase 3 re-spins with a stack of 3 Scatters high, shifting with each re-spin.

If a feather appears in the middle reel players receive 4 extra re-spins.

These are Wild and move with every re-spin, also getting the Feather symbol will result in 4 extra re-spins.

The Kingdoms Rise Jackpots are triggered at random, and can appear on any spin. The three jackpots are as follows:

Forbidden Forest is the fourth Kingdom in the popular slot series Kingdoms Rise with bonus feature games to keep you well entertained.

Therefore, Forbidden Forest is a low volatility slot with a 95.99% RTP. Therefore, this game is all about the Re-Spins and Roaming Wilds.

The significant win potential comes from the high-value Warrior, when she fills the reels resulting in a 11,520x your bet stake.